This review is a bit different – it`s part review part “OMG I can`t wait for the next awesome thing which is coming soon to be finally released” So I’m going to keep you in suspense for now and talk about something you can get your hands on right now and that is already legendary LaCie Rugged USB-C external hard drive. I`m pretty sure you have seen the silent travel companion on so many Instagram photos and you recognize it from far away by its bright orange bumper. For a lot of photographers, videographers and for just human beings in general 😀 LaCie Rugged has become almost like a synonym for mobile storage device like GoPro is a synonym for action cameras.

I will be looking at the LaCie Rugged USB-C 1TB and giving you my honest opinion and then, later on, we will get to the mouthwatering news and a sneak peek at what`s to com really-really soon. So no cheating and scrolling down 😀

So what are the key aspects of an external storage for me as an avid GoPro user?

Let me be clear – I will not run over it with my car!!!! My car is 1.3 tons so I not sure if the drive would survive but it`s good to know that if a smaller car ran over it it would survive. But it`s actually stupid to be too much stuck at the car thing because what it really means is that the LaCie Rugged USB-C can withstand pressure and that`s what It`s all about.

My previous external hard drives have been pretty standard and had plastic or aluminum cases at best and since an HDD is a relatively fragile device I always packed it between socks or T-shirts to dampen any blows from the good people at airport grown crew handling the luggage. LaCie has addressed that issue and for a traveler who trusts their gear to the airlines, it`s super important for the gear to withstand being at the bottom of a pile of suitcases and getting tossed around.

One thing that contributes to the toughness of the drive is definitely the signature orange bumper. It`s a silicone bumper that you can easily remove if you want the drive to be smaller but then you lose some of that protection. Plus, without the orange bumper, the drive looks just like an ordinary drive. I mean it looks nice and sleek and has a modest LaCie logo on top but it looks anonymous so for me the bumper stays on at all times 🙂

The other part of the toughness is the rainproof factor – it`s extremely comforting to know that if you are out on a hike and have the HDD in your backpack and if you happen o get caught in heavy rain and all your gear gets soaked nothing will happen to your videos and images stored on the LaCie Rugged USB-C. I was messing around with the HDD in snow and it never even crossed my midnd to be extra careful with snow getting the best of the device.

Speed all comes down to what files will you be moving and what USB ports do you have on your PC or Mac – A lot of small files take longer than a few large files in general. The factory specs promise us 130MB/s with the usual disclaimer that it all depends on this and that and actual results may vary. I`m not a particular hardware geek and more or a gadget nerd so I have very little experience running very clinical hardware tests so the speed test will be based on one benchmark software CrystalDiskMark 6 and if you feel i completely fumbled this part of the review please let me know.

So the picture tells the story I think pretty clearly – although the LaCie Rugged USB-C is up against an older HDD it doesn`t really matter. What I take away from this small test is that the speed matches the factory stats and on one occasion even exceeds. I used USB 3 Ports for the tests and here are some more real-life numbers moving files from PC to the HDD:

* The testing was done under normal circumstances: Chrome opened on two screens with a lot of tabs open, a video playing on VLC on one screen, Skype chat active etc. so basically normal day-to-day conditions and not a clinical test.

So here’s the third aspect, some may argue that it`s not important but I don`t care – I like cool products 🙂

LaCie Rugged series looks very distinct from all others – designed by a famous designer Neil Poulton the drives stand out from the crowd. It`s pretty obvious why – the bright orange color of the silicone bumper.

The metallic silver/gray aluminum case has a subtle shine to it and looks ordinary without the bumper, but as long as you have the bumper on the Rugged series shine. Search for #lacierugged on Instagram for example and you will immediately see how photogenic the drive is standing out in almost maniacally aligned photo gear that is mostly all black.

The little cut at the top where the USB port actually makes the drive look like it has horns 😀 or is it just me? From now one I will call LaCie Rugged the “Little orange devil”

In addition to looking cool, the silicone bumper makes it very solid to hold and will not slop on uneven spaces! In terms of size, the bumper adds a bit of bulk to it but putting it next to iPhone 6s it`s still a decent size and can fit in your pocket.

If you need an external HDD, and if you read this blog you probably do, LaCie Rugged is the way to go. I don`t have a good comparison with some of the other rugged HDD drives but to me, the three aspects line up perfectly: it has style, it has speed and it has strength. Priced around 89USD for 1TB it`s on par with other rugged drives, obviously a bit pricier than regular drives that never leave the comfort of your desk but a lot cheaper than SSD drives.

You can get the LaCie drives from:

… And now to the big reveal…

I`m extremely excited about this new product coming out soon for a reason – I was desperately looking for something EXACTLY like it a year ago when preparing for a trip to Thailand. I needed a backup drive that could survive backpacking, is small, is tough like a GoPro and most importantly – wouldn`t need a laptop to back up my photos and videos. Basically what I wanted was an external hard drive that had an SD card slot (ideally a MicroSD also, but that would have been solved with the adapter)

I pretty much scrolled through every bigger electronics and photo gear e-store and at that time it appeared a product I considered didn`t exist. My searches led me to TWO products and one of them became my absolute favorite. I found the Nexto Di NCB-20 that is more of a professional tool for teams that have butloads of SD cards to back up and the  GNARBOX. Gnarbox is a backup device (SSD) with SD, MicroSD slots and USB ports that uses your Mobile device as a screen. The magic of Gnarbox is that you can edit your photos and videos on the go and share them from a top of a mountain or from the depths of a jungle, as long as you have mobile internet for sharing. The downside is that is has limited storage.

LaCie has teamed up with DJI to bring us the BOSS (Backup On Set Solutions) – DJI Copilot.

It basically is the EXACT thing I was so desperately looking for plus it has some more:

This is like my wet dream because I kind of feel I thought of this product before it came to market. I was really astonished this didn`t exist before with so many devices out there producing massive amount of data with 4k videos and high-resolution photos.

With the Copilot you can just slide your memory card in the drive and back up all your data – no PC needed. This will be perfect for anyone with a camera who need to be sure the photos and videos are safely duplicated or backed up to free space for new footage.

I`m intrigued to see how it co-exists with the Gnarbox because even though they are different in a lot of ways they share the same DNA I feel. One has the emphasis on the backup and storage aspect and the other one puts editing feature on the pedestal, but they are both a much-much needed remedy for an ache a lot of content creators have had for a while now.

The DJI Copilot should be available in early April and my guess is it will fly off the shelves like hotcakes so keep your eyes open once it becomes available. 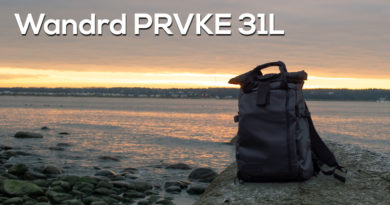 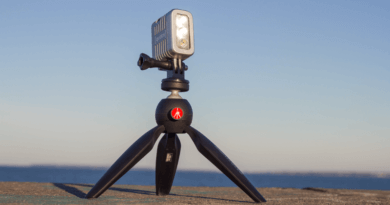 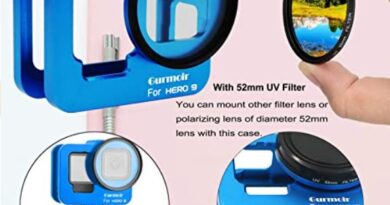